Metal PCB and Its Advantages

Why Use Metal PCB?

Metal PCB is the circuit board made by metal core laminates, which gets widely used in LED equipment. Metal PCB is difficult to produce than FR-4 PCB, sometimes more expensive.

Why do we need to use metal PCB?

At present, many double-sided and multi-layer PCBs are high density, high power boards, which are difficult to dissipate heat. Conventional substrates such as FR4 and CEM3 are poor conductors of heat, which are insulated between layers and heat cannot be dissipated, while local heating of electronics will result in high-temperature failure of the components. Insulated metal substrates possess a heat dissipation capacity 5-10 times than FR4, can solve this heat dissipation problem. 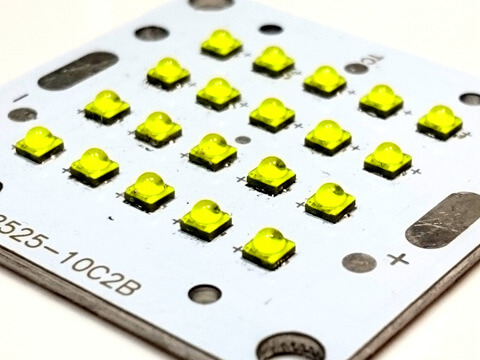 The conventional printed circuit board consists of resin, reinforcing material (such as glass fiber) and copper foil. The thermal expansion coefficient (CTE) of the substrate is 80~90PPM/°C in the Z-axis direction, while the CTE of copper is 16.8PPM/°C, that means the metalized hole wall and the insulating wall of conventional PCB have a large difference in the CTE. If the generated heat cannot be eliminated in time, the metalized hole will be cracked by thermal expansion and contraction, resulting in unreliable electronic equipment.

SMT (Surface Mount Technology) makes this problem more prominent. Because the connection is achieved by direct soldering between the metal pad and SMD, the CTE  difference of the ceramic chip (6PPM/°C) and FR4 substrate (13-18PPM/°C) probably cause connection fracture after a long time running.

The metal PCB can effectively solve the heat dissipation problem, thereby alleviating the thermal expansion and contraction, and improving the durability and reliability of the electronic equipment.

Structure and Types of Metal PCB

The dielectric layer is placed on an anodized, insulated metal base and laminated together with a copper foil on the surface. It acts as an insulating layer and is usually 50~200um. If it is too thick, can act as an insulator to prevent short-circuiting with the metal base, but it will affect the heat dissipation. If it is too thin, can dissipate heat well, but it is easy to cause the short-circuit.

The back of the copper foil is chemically oxidized and the surface is galvanized and brass plated to increase the peel strength. The copper weight is usually 0.5/1.0oz.