Substrate-like PCB - The highlight in the future PCB industry

Smartphones have evolved from 4G LTE to 5G, and the complexity of Massive MIMO antenna configurations has made RF front-ends take up more space in 5G smartphones. In addition, the amount of data processed by the 5G system will grow geometrically, which will increase battery capacity requirements, which means that PCBs and other electronic components must be compressed to achieve higher density and smaller form factor, which has pushed HDI PCB toward thinner, smaller, and more complex processes.

In 2017, Apple requested a new circuit board, called Substrate-like PCB (SLP PCB), for iPhone 8/X. By introducing Substrate-like PCB, Apple reduced 30% the volume of the mainboard while all of the chips remained. Substrate-like PCB requires a more sophisticated process, which has resulted in a modified semi-additive process (mSAP) came up by PCB manufacturers. And then, Substrate-like PCB technology got introduced into the new version Samsung smartphones in the same year, which was aimed to bestow additional flexibility to their products. 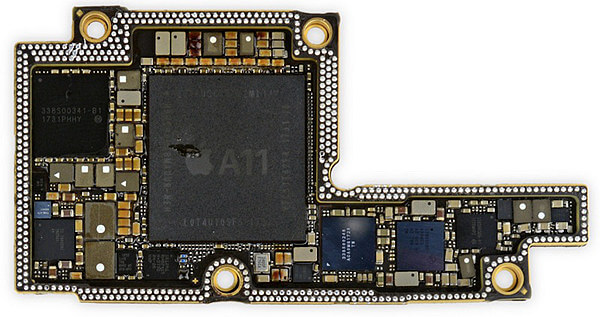 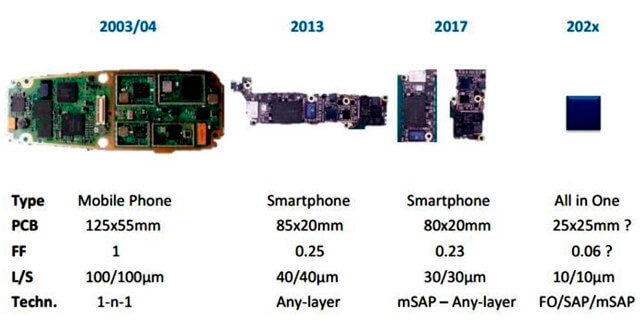 Development of Smartphone (From AT&S)

So, what is Substrate-like PCB?

Substrate-like PCB (SLP PCB) is the next generation of high-density PCB which requires trace/spacing equal to or less than 30/30 μm (now 40/40 μm is the limit for HDI), for further reducing the device size, leaving more space for other components.

This kind of PCB is called substrate-like PCB because it is very closer to the IC carrier board (an advanced "circuit board" carrying a chip, with circuitry inside for connecting die and the motherboard, the regular trace/spacing is required about 15/15 μm) for semiconductor packaging, but it has not yet reached the specifications of the IC carrier board, and it is still equipped with various active and passive components, so SLP board still belongs to the category of PCB. 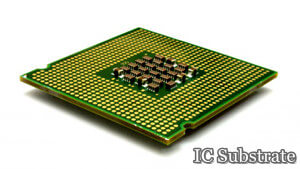 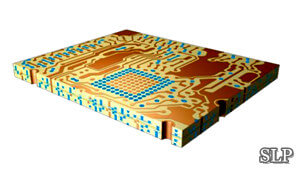 Why Substrate-like PCB is required?

In addition to Apple and Samsung, Huawei also adopted SLP PCB in its new smartphone P30 in 2019. More and more other digital manufacturers hope to join in this market.
According to Yole's statistics, in 2018, the global SLP market is 987 million US dollars. In 2018, the proportion of SLP technology used in global mobile phone shipments is only about 7%, and the corresponding output value is about 12%. Yole estimates that the proportion of shipments using SLP technology handsets will increase to 16% by 2024, corresponding to an output value of approximately 27%.

In terms of production technology, SLP technology is currently dominated by Taiwan, South Korea, and Japan, such as Zhen Ding Technology (ZDT) and Meiko Electronics, while Chinese mainland PCB manufacturers aren't been left behind, many of which have invested a large number of high-end HDI/SLP PCB lines in the Pearl River Delta, Jiangxi, and Hebei in recent years, meanwhile, most industry analysts are also optimistic about the transfer of Substrate-like PCB technology to the mainland.

There are reasons to believe that Chinese PCB manufacturers would dominate the SLP market within the next decade.