What Are Reflow Soldering & Wave Soldering?

We have already known SMT (Surface Mount Technology) is a surface mount soldering method that is different from THT (Through-hole Technology) which is need components inserting through the holes.

Inside the Reflow Soldering Oven

Let's go through the different processes between reflow soldering and wave soldering below.

In the oven used for wave soldering, the molten alloy which mainly consists of Sn & Cu is preliminarily poured. And the oven maintains a relatively high temperature, the upwelling of molten solder is produced by a pump to generate a standing wave. When the PCB in which the component is inserted passes through over the surface of the solder wave with a bevel conveyor, a firm mechanical and electrical connection will form between the exposed metal pins and the pads on PCB.

The brief flow of wave soldering:

Wave soldering is usually divided into 4 steps in the oven,

1.Apply flux, which is classified as corrosive and non-corrosive. Its main function is to clean and remove metal surface oxide, while preventing secondary oxidation;

3.Wave soldering, the temperature rises, the molten alloy adheres to the pins and pads to form an electrical connection.

In some cases, the PCBA will also be cleaned to remove the slag. 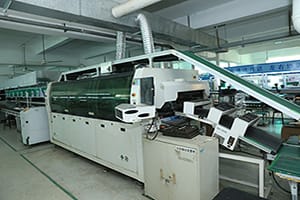 In the reflow soldering process, the solder paste which consists of solder and flux is applied on the pads, and place the components upon the solder paste to form a temporary connection. Then, the PCB is soldered in the oven by means of hot air, infrared rays or other heat radiation, the temperatures in the oven will be strictly controlled, the solder paste will melt and solidify to form stable solder joints.

There are generally four working areas in the reflow soldering oven,

1. Temperature rises, the water is evaporated, the solder paste softens to cover the pads and pins and isolates them from the oxygen;

In general, reflow soldering is more time-saving and cost-effective than wave soldering, but so far wave soldering cannot be replaced in some application. Many hardware containing DIP and SMD components often require hybrid soldering. To cope with this situation, selective wave soldering was proposed and applied, which is the same as the wave soldering principle, just to add a tray to isolate the parts which are no need to be soldered from the wave, or use the nozzles to solder.

In short, reflow soldering and wave soldering deal with different situations and both of them are necessary. Moreover, the soldering method is just one of many options for electronics manufacturing, in which we must consider more sides. To know more details on how to make high-quality boards, please contact us.