The Prices of Copper Clad Boards Rise Again in 2019

CCL (copper clad board) is a key raw material for PCBs, and can't be replaced now. One of the world top3 suppliers for PCB CCL- Shengyi Technology takes the lead in price rise in 2019, part of the increases will be 5%, which is expected to be implemented in September. This reflects a strong market demand for copper clad boards, meanwhile will have a impact on the PCB industry.

This year, the global electronics industry is very cautious in pricing, the hot components such as memory, semiconductor silicon wafers in 2018 had lost the traffic, and got adjusted back in the prices. It is understood that the price increase of Shengyi is mainly due to the fact that China's 5G infrastructure drives the demand for copper clad boards.

Firstly,  Shengyi will increase its price targeting the second-tier PCB factories in South China this September, then the price increase will expand to East China, which means that PCB CCL suppliers like Shengyi will make different pricing towards the customers in different levels. It is expected to reduce the risk in receipts of these copper clad board suppliers but brings disadvantages to medium/small size PCB companies.

Kingboard (KB) and Shengyi are the world's top 2 PCB CCL manufacturers, while Taiwanese Nanya rank 3. KB's output value in 2017 is still the highest in the world, but from the 2018 performance, the gap between KB and Shengyi has already reduced by about 1 percentage point. 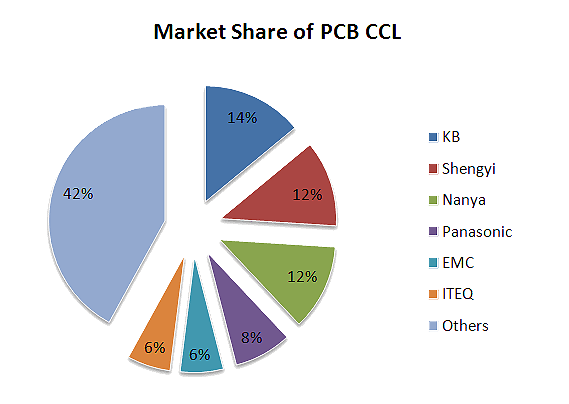 Among them, Shengyi supply more the medium/high-end materials. Recently, due to the acceleration of the 5G infrastructure construction in China mainland, and the changes in the PCB related industries, Shengyi decided to increase the price of some types of materials.

How the PCB manufacturers think this price increase?

The price increase of PCB CCL will absolutely affect the cost of PCB manufacturing, which has caused great concern in the PCB industry. The world's leading PCB leader, Zhending Technology, said that it is actively striving to expand the supply of raw materials, the price increase is expected to affect few.

PinSheng Electronics said their purchase volume is large, compared with other small factories, they will not be affected by the price increase of copper clad boards, coupled with the recent good demand for HDI PCB, PS' capacity utilization is full, and the RMB rate trend will help the company increase its gross profit margin.

Another manufacturer mentioned that the price of some products of Shengyi was lower than that of some of its peers, the price increase is within acceptable limits. Anyway, the specific situation is still decided according to the negotiation between the PCB CCL supplier and the PCB manufacturer.

What is copper clad board?

"Copper clad boards are manufactured by curing under pressure and temperature layers of cloth or paper with thermoset resin to form an integral final piece of uniform thickness. The size can be up to 4 by 8 feet (1.2 by 2.4 m) in width and length. Varying cloth weaves (threads per inch or cm), cloth thickness, and resin percentage are used to achieve the desired final thickness and dielectric characteristics." (*Wikipedia*)